The All Faiths Network was invited to attend the launch event of the National Council of Hindu Temples (NCHT) “Dharma Rising” conference in the Houses of Parliament. It is the oldest and one of the largest Hindu umbrella bodies linking over 200 Hindu Temples and Faith Organisations and works with them for the benefit of the Hindu community across the UK. To find out more about NCHT go to http://nchtuk.org/. The London event was followed by events in Edinburgh and Birmingham with key speakers Swami Ambikandanda Saraswati and Sri Davindra Rishi Jeffrey Armstrong.

“Dharma is an ancient Sanskrit word with no equivalent in English. A philosophy built on the connectedness of all living things To seek harmony with wisdom and compassionate devotion to life.

“A universal inclusive world view built on non-violence, wisdom, reality and dynamism. Refined and tested over 10,000 years, primitive in origin and yet innovative and contemporary in application.” (British Board of Dharmic Scholars).
In the face on continuing decline in social standards and political turmoil the Dharma Rising events aim to get the Hindu community in Britain imbuing these values in a constructive and contributive way into society. 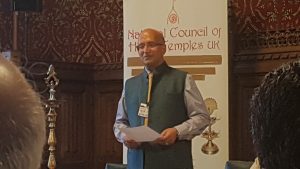 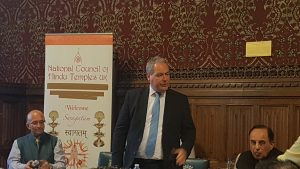