At their recent meeting in Havana, the first in history, Pope Francis and Kirill, Patriarch of Moscow and All Russia discussed the mutual relations between the  Churches, the crucial problems of their faithful, and the outlook for the progress of human civilization.

“By meeting far from the longstanding disputes of the “Old World”, we experience with a particular sense of urgency the need for the shared labour of Catholics and Orthodox, who are called, with gentleness and respect, to give an explanation to the world of the hope in us” says their joint declaration published in the Radio Vatican website (full transcript here). 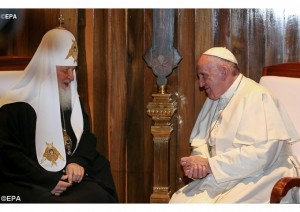 The declaration continues: “In our determination to undertake all that is necessary to overcome the historical divergences we have inherited, we wish to combine our efforts to give witness to the Gospel of Christ and to the shared heritage of the Church of the first millennium,

“Our gaze must firstly turn to those regions of the world where Christians are victims of persecution. In many countries of the Middle East and North Africa whole families, villages and cities of our brothers and sisters in Christ are being completely exterminated. Their churches are being barbarously ravaged and looted, their sacred objects profaned, their monuments destroyed. It is with pain that we call to mind the situation in Syria, Iraq and other countries of the Middle East, and the massive exodus of Christians from the land in which our faith was first disseminated and in which they have lived since the time of the Apostles, together with other religious communities.”

The declaration further calls on the international community to act urgently in order to prevent further expulsions of Christians from the Middle East.