Recent
You are at:Home»Faiths»Report Examines Perception of Religion and Looks at Ways to Increase Dialogue and Trust across Faiths

The report has been published annually since 2008 and aims to “provide objective data on the perception of religion and the media coverage of religious issues, in a study that compares attitudes and frames between countries. The analysis focuses especially on the perception of Islam and traces the development from 9/11, over the Pontificate of Benedict XVI and Obama’s 2009 speech in Cairo, to the recent development in the Middle East that is shaped by the unprecedented rise of the Islamic State. The implications of the findings are unambiguous: the only way to overcome the divide between religions is to improve our attempts at unlearning intolerance.” 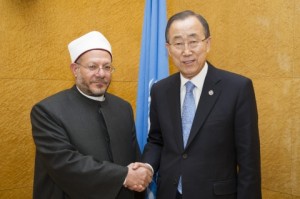 In the preface to the report, Michael Møller, Director-General of the United Nations Office at Geneva, notes that “the UN Climate Summit in Paris at the end of November and the 2030 Agreement on Sustainable Development Goals in New York last September showed what can be achieved if all understand the need for resilient solutions. I am optimistic that the Secretary General’s Plan of Action to Prevent Violent Extremism, launched on January 15 in New York, and the Initiative by the Grand Mufti of Egypt [which seeks to deepen knowledge about and address the underlying causes of extremism and terrorism], announced on 20 January in Davos and reaffirmed at the United Nations in Geneva, are sending a clear message: we are all united in our efforts and desire to end violence.”  The Director-General goes on to highlight trust between people as the glue that binds us together as families, neighbors, nations and a global community.