Jan Figel, EU Special Envoy for the Promotion of Freedom of Religion or Belief outside the EU

Massimo Introvigne, Professor of Sociology of Religion, Former Representative of the OSCE for Combatting Racism, Xenophobia and Intolerance and Discrimination against Christians

Mr. Roux opened the event by introducing the panellists and making the point that the conference was not political, was not about ‘finding fault’ with any of the parties involved and was directed to building bridges between all parties and religions, increasing friendship and understanding.

In this spirit Mr Figel opened the discussion by making the point that whilst one cannot necessarily prioritise human rights, religious freedom was a very important one, not just for religions themselves but also for society broadly, as this was a right that tended to be a monitor of and relate to the health of any particular society. He made the remark that applying the law on extremism to peaceful minority religions, as it has been the case recently in Russia, is not only unfair and harmful to concerned individuals and religious groups, but also very counterproductive as regards real extremism and terrorism and would certainly not help in preventing terrorism. He also made it clear that, from his position as EU Special Envoy, he was very willing to engage with Russian government and religious groups in order to bring about religious understanding and tolerance and wanted to be part of the direction forward.

Mr. Sevastianov told the attendees that he himself not only had a family history in bringing about religious freedom reforms but that as an Old Believer of the Russian Orthodox Church he was well aware of how discrimination could affect the lives of individuals. He also made the point that the Russian Orthodox Church supported religious freedom and whilst perhaps overall, taking a conservative approach to the subject and there being different approaches within the Church, were certainly for freedom of religion. He also said that he felt it very important for religious groups to be pro-active in responding to criticisms and making it very clear what their beliefs and activities consisted of. In short, the public relations aspect of a minority religion was a key responsibility for a “new” group entering into Russian society to enable themselves to be understood. He also said that he felt the predominant view within the Russian Orthodox Church was that it was not concerned, from the perspective of competition or danger, with religious minorities in Russia. He made it clear that the fears from the government regarding new religious minorities in Russia stemmed from the political context, and that government and society needed reassurance on the motives of religious groups.

Professor Introvigne gave a PowerPoint presentation which focused on two minority religions which are having a difficult time in Russia – the Jehovah Witnesses and the Church of Scientology. He said that both he and other academics, including Russian academics, had analysed the way many minority groups have been dealt with through legislation concerning extremism, though Professor Introvigne said that it was a pity that the expertise of Russian academics was not recognised or taken advantage of in the same way as it is in Western Europe. He pointed out that using the criteria in the Russian law, every religion, including the Russian Orthodox Church, could be classified as extremist as, amongst other things, the definition did not even have a requirement of causing or intending violence as part of its definition. He also pointed out that there was a small minority of people in the Russian Orthodox Church, naming a Mr. Dvorkin as a key amongst them, who as part of a so-called ‘anti-sect’ movement were making discriminatory remarks about religious minorities including Hindus and that there had even been demonstrations in India in outrage at some of his actions and comments.

During the broad discussion that followed with the audience the point was made that the accusation against minority religions was often that they were front groups for CIA or other foreign powers with the intention of causing destabilisation or ‘infiltration’ of Russian society. 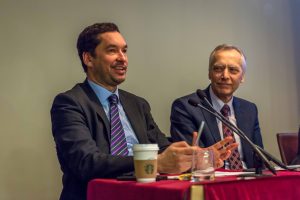 Several contributors made the point that not only was the modern ‘anti-sect’ movement started in the USA but that Mr. Dvorkin (who is also currently the D/President of a European anti-sect movement) had spent many years living in that country during the movements forming years and had now imported this kind of discriminatory behaviour into Russia. The other aspect to this was the illogic of any government attempting to infiltrate minority religions when it would be far more effective for any foreign intelligence power to infiltrate the Russian Orthodox Church itself.

The discussion went back and forth exploring different aspects of the points covered above and the panellists answered the questions of the attendees extensively. At the end Mr. Weightman, Director of the All Faiths Network, congratulated the panel for having summed up different perspectives and vectors at play within Russia and asked them how they saw a way forward. All speakers were very positive about the discussion that had taken place and saw it as a foundation for future events along the same theme in different locations, including Russia. It was agreed to move the whole process forward along academic, political and religious lines in order to generate greater dialogue and understanding. Further events are now envisioned in the coming months and contacts will be developed to make this possible.

All Faiths Network and
European Interreligious Forum for Religious Freedom

For further information please contact Martin Weightman at
martin@aonm.org or +447595659052