An international seminar on the life and ways of Prophet Mohammed condemned terrorism and declared that Islam has no room for any terrorist activities.

“Islam is the religion of peace, fraternity, tolerance, mutual respect and patriotism,” said eminent scholars from across the country at the three-day international seminar that was inaugurated on Sunday at Al Mahadul Aali Al Islami at Taleemabad in Shaheen Nagar. 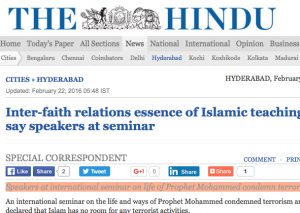 The scholars also emphasised on inter-faith cordial relationship terming it as the “essence of Islamic teachings,” according to a press release.

Deputy Chief Minister of Telangana Mahmood Ali, who was the chief guest, called upon the Muslim countries to spend their wealth on educational and welfare activities instead of using it for warfare, weaponry and destructive purposes. He urged the Islamic scholars and clergies to guide Muslim youth to excel in worldly affairs of engineering, medicine, science and technology and other areas and be of community service.