A report in the The Economist, based on data from the European Social Survey (ESS), suggests that a third of Europeans who consider themselves Christian say they attend services only once a month. Across Europe some 190m people go to church regularly from a nominal Christian population of 585m (see map).  The survey polled 55,000 Europeans across 29 countries in 2012, 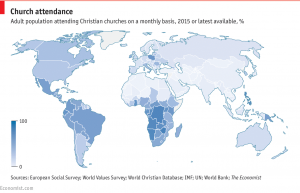