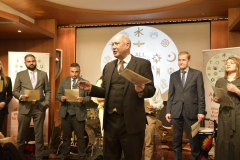 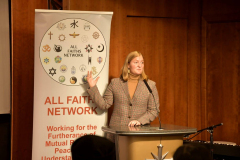 ‘Fusion’ was the new buzzword for the AFN’s annual Interfaith Week concert held at the London Church of Scientology. An energetic and eclectic night filled with a combination of faith-based music, dance, poetry, song and prayer uplifted the audience, celebrating inclusivity and the spirit of co- existence.

Martin Weightman, Director of AFN, said that “The concert was the epitome of people of all faiths, and none, being together, working together and enjoying life together. Whilst we have been doing this for some years now, we added an innovative idea this year: Interfaith fusion music and an interfaith prayer read by nine people from different religions.”

These were a real hit with the packed audience who saw not ‘different religions’ but united performers and united voices.

The interfaith fusion music was performed by The Jive Aces, UK’s top jive band, composed of Scientologists, and Christian Minister Reverend Precious Toe kicking off with ‘He’s got the whole world in his hands’.

Ian Clarkson, lead singer of the Jive Aces, told us that, “Music is an international language. Through music, the emotions and feelings we all have in common can unite us all.” This was certainly what happened on the night with Precious’ gospel style fusing with the Jives’ bluesy-jazz backing setting which set the audience afire.

The penultimate presentation of the event was an Interfaith Prayer opened by a priest from the Zoroastrian Fire Temple and followed by 8 other people from different religions – all were standing together on-stage, side by side, reading successive sections of the prayer. It was a heart-felt moment, sincerely read and appreciated by the attendees. Mandip Singh Trustee of London’s Central Gurdwara said afterwards that, “As people of faith, it is important to recognise, to meet and appreciate each other’s faith perspective of the divine through events such as this. Using new and innovative ways to celebrate the many colours of the divine, through music and common interfaith prayer. It was an honour and a pleasure to participate in this event.”

Another “Faith Fusion” was a new interfaith poem written and performed by Jafira Jenumz Naqvi fusing Urdu poetry with backing from the sax player (playing bongo drums!!) and pianist from The Jive Aces

The evening was filled with a wide range of other music and talks. Hindu dancers from the Sanskriti Centre performed an exquisite traditional Indian dance, Bantu Arts gave an electrifying presentation of African traditional drumming and dance that took the roof off, whilst James Green, following on from the drumming theme gave a demonstration of how he uses the djembe drum to help people with various kinds of difficulties.

The evening highlighted support for the new ” Faith Covenant” encouraging faith groups and local councils to work together. Councillor Muazzam Sandu, Barking & Daggengham explained the initiative from the Parliament’s All Party Parliamentary Group on “Faith and Society” that encourages  through the adoption of a Faith Covenant – the idea to draw upon the enormous resources that faith groups give to wider society whilst setting standards for interaction.

AFN were honoured for representatives from Faith Belief Forum, Programme Coordinator Jessica Hazrati and Bellwether International CEO Rachel Miner speaking on their specialist fields – protecting the rights of religious minorities and developing a range of programmes to facilitate interfaith work in schools and communities.

Youth representation was given by 10-year old Princess Victoria Eganda who recited a beautiful poem on human rights which she had written herself.

AFN wishes to graciously thank Central Gurdwara and Trustee Mandip Singh for providing Langar food for all guests at this year’s event. Another interfaith food fusion !

Fusion Music project is AFN and Jives Aces collaboration formally launching early next year. If you would like to get involved please contact [email protected] 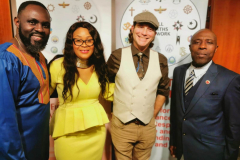 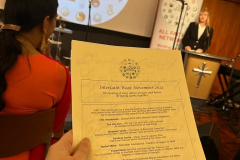