After Kenyan authorities reported that Al-Shabaab terrorists attacked a bus near the northeastern village of El Wak, attempting to separate Muslims from the Christian passenger, a number of Muslims reportedly stood up against the radical gunmen and told them “to kill them together or leave them alone,”.

The Bishop of Garissa in Kenya has said that the group of Muslims who risked their lives to save fellow Christian passengers have shown terrorists that they do not have their support. 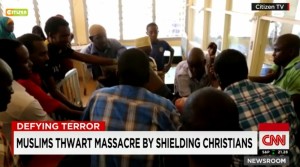 “It is a very good thing; a concrete sign that Kenyan Muslims are against violence,” His Exc. Mgr. Joseph Alexander said, according to Fides News Agency.

“The Shabaab now know that they do not have the support of the Muslim community,” Alexander added. “We hope that we continue in this direction, because a year ago there was a similar attack that caused a massacre.”