Speakers were Ahsan Ahmedi: radio host on the Voice of Islam and Regional President for Ahmadiyya Muslim Association; Tanveen Kaur, who carries out advocacy work for United Sikhs; Satish Sharma: Secretary General of the National Council of Hindu Temples; Dr Sheik Ramsey, a British Islamic scholar and founder of the Oxford Islamic Information Centre (OIIC) and Muslim chaplain of Oxford Brooks University; Tracey Coleman, Public Relations Director of the Church of Scientology. The meeting was chaired by Martin Weightman, Director of All Faiths Network and the meeting was held at the Church of Scientology on Queen Victoria Street, London.

Whilst the concept of human rights has developed over some thousands of years it was not until the Universal Declaration of Human Rights in 1948 and then the European Convention on Human Rights in 1950 that a comprehensive, and in some respects, a legally enforceable array of rights, was recognised by governments around the world.

The All Faiths network’s event explored how different religions have expressed these rights, without calling them as such, in their religious texts.

The focus was on three specific human rights – freedom of religion or belief, freedom of expression and freedom of association. Summaries of the presentations will be available in due course.

It was broadly agreed that religion can and has been used as a force for both good and evil and has to this day been perverted to serve the purposes of evil and/or special interest groups that do not reflect the core teachings. However, such negative actions do not reflect the core principles of each religion and do not change the initial intention and purpose of the religious texts.

The purpose of the meeting was to emphasise these points and to show the respect that religions hold for equality and humanity, and consequently human rights hundreds even thousands of years before human rights ever became a formulated set of rights.

The speakers showed how key human rights principles were expressed in their religious texts giving various examples of these.

The event is aimed to be one of a series of events that will be held in different places in the UK with the purpose of demonstrating this to a much wider audience, both secular and religious.

We are people living together in community with each other. Let’s understand better how this can be done through different religions working together and adhering to the principles of those religions. 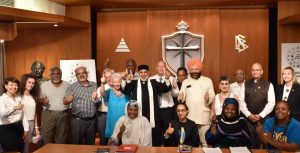