The Director of the All Faiths Network attended an interfaith peace event held by the Ahmadiyya Muslim Elder Association UK in Crawley recently.

The event was titled World Crisis and Pathway to Peace. Four different faiths spoke and about from their own scriptures and religious activities on how their religion contributed to peace in the world. The speakers were Dr. Sunil Kariyakarawana from the Buddhist Centre UK, Father Chris Dobson of the Friary Church, Mr. Graeme Wilson from Church of Scientology UK and Imam Humayun Uppal from the Ahmadiyya Muslim Association (AMA). It was self-evident that there were no barriers between the attendees and how different faiths viewed the world and no real reason why we should not be able to live and get on with our neighbours, whatever their religious belief. 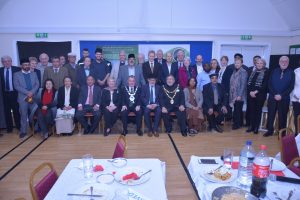 In fact the consensus was that religion, when used in the name of violence, is no longer religion but has become highjacked into the political arm of another’s push for power and geographic domination. Another issue raised was that it was unfortunate that certain media sensationalise the acts of a few and tend to tar with the same brush all other members of that religion, even though they themselves are completely against any act of aggression.

The meeting was attended by two mayors from the area as well as representatives from many other faiths and social organisations. The evening was rounded off with a delicious meal prepared by the AMA and the opportunity to talk and develop future projects with all attending. 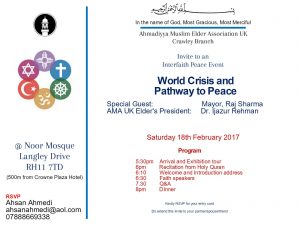